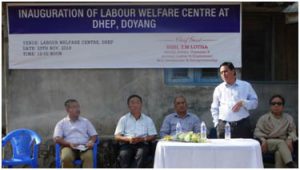 Total dependence on Government has resulted in impeding social development and created new problems which have been affecting the very social fabric of the state. Therefore, having genuine concern for the welfare of the weaker sections of the society and also with a view to give support for their economic well-being as well as to create employment opportunities, the State Labour Department has established 3 (three) Labour Welfare Centres at (i) Nagaland Pulp & Paper Company, Ltd, Tuli, Mokokchung district, (ii) Mini Cement Plant, Wazeho at Phek district and at (iii) 5th Mile, Dimapur, imparting 8(eight) months training courses in cutting & tailoring, knitting and embroidery fully sponsored by department. Preferences are given to the dependants of the industrial workers and then to general public to avail such training courses. A fourth Labour Welfare Centre has being recently established at Doyang Hydro Electric Project, Doyang, Workha and classes will be commencing from 2017 onwards. 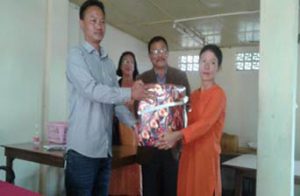 The main purpose of setting up Labour Welfare Centre is to impact free training courses in Tailoring, Knitting and Embroidery. This training course is for 8(eight) months period (April to November) and is free of cost.

The Department every year at the end of the training course and on the day of distribution of certificates declares Best Trainee Award from each trade from all Labour Welfare Centres and award 1(one) machine of his/her trade. The scheme is to encourage competitiveness among the trainees as well as for self employment.

During the year 2016-17, the following trainees in each trade have completed the 8 (eight) months training courses and the department have given completion certificate to the successful trainees as per the figure shown below:-