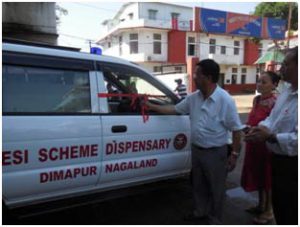 Benefits under this scheme include:-

On registration every insured persons (IP) is provided with a ‘Temporary Identification Certificate’ (TIC) which is valid for a period of 3 months and on completion of this period, the Pechan Card is handed over to the IP and family to avail medical facilities at the designated ESI Dispensary and hospital. 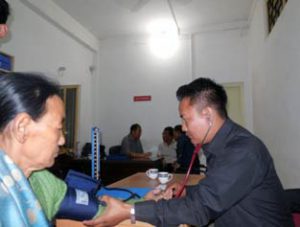 Presently the ESI Scheme is implemented in the district of Dimapur. Primary Care is provided at the ESI Scheme Dispensary at 4th Mile, Dimapur and Secondary Care at the empanelled Dimapur Hospital and Research Centre (DHRC). ESI Scheme Dispensary Ambulance was launched on 1st April 2016 to give free emergency service to IPs. Health Camp was held on 17th April, 2016 at Apex Motors, Dimapur. Telemedicine Service has also been launched from 1st December, 2016. A total number of 443 IPs have availed medical benefits under this Scheme during the year 2016-17.

Consequent upon the directives of the ESIC on the new decisions taken at its 162nd meeting held on 31.07.2014, the State Executive Committee has been constituted vide Government Notification No. LAB-1/6/2012-13 dated 8th Feb, 2016.